How to Network Without "Networking!" 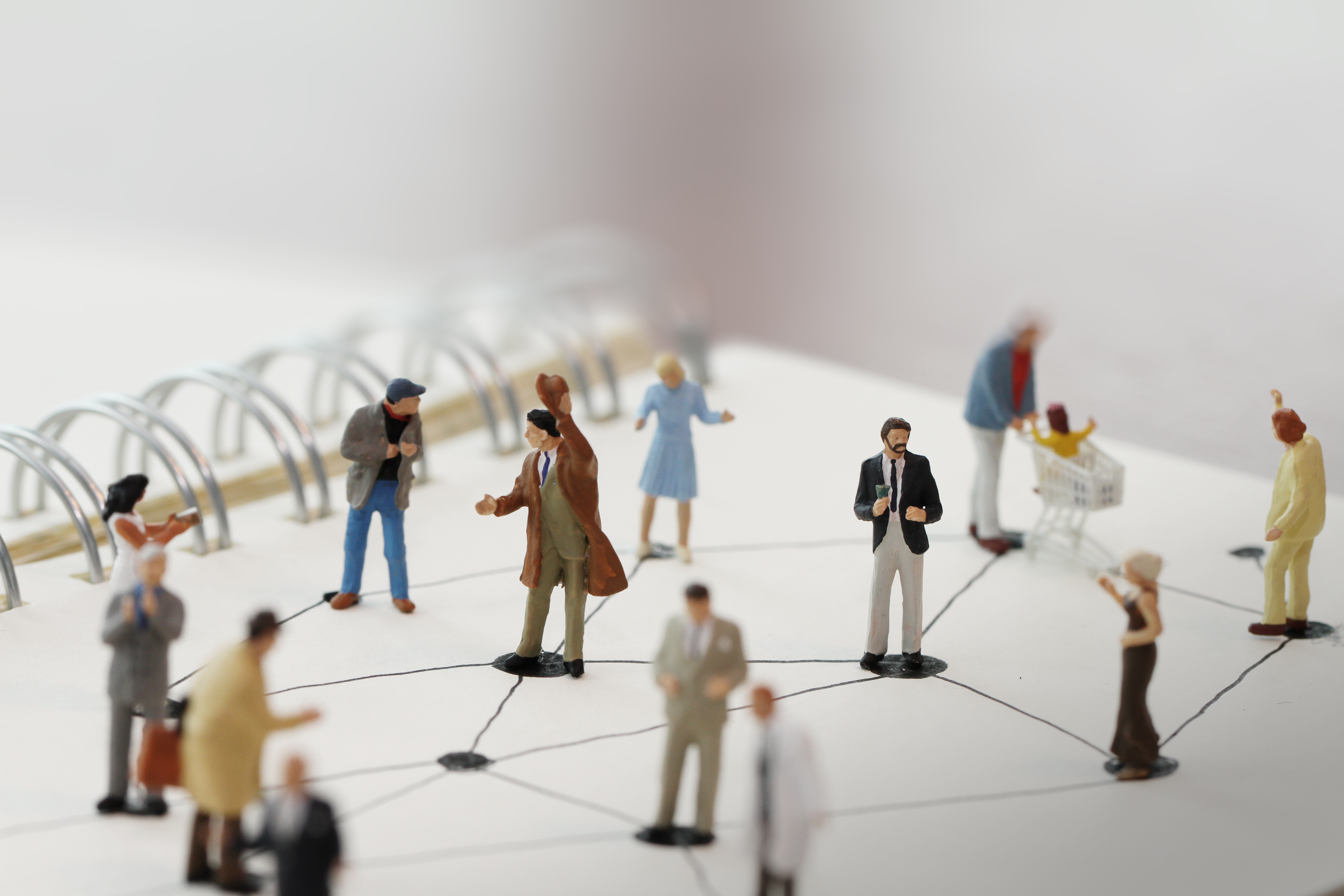 Like Brand Building! and Elevator Pitching! and other corporatized-gerunds-turned proper nouns, Networking! reduces necessary human interaction to the transactional from the trust-building. By gaming how to get ahead in (show) business, we reassure ourselves that it’s not who we know, but rather how many. So, anyone can do it. You can, too! You just need to “work harder.” Plus, we build and support a cottage industry of Experts! who parse, practice and repackage inauthenticity as a calling card. Artifice sells books and fills workshops, but it’s a losing long-term strategy. If you truly want to expand your circle of fellow professionals, follow this simple rule: Don’t be an ass. Be yourself.

Relationships ought to be measured qualitatively, not quantitatively. It’s not how many people we know, it’s how many people trust us, like us, could see spending weeks, months, years, a lifetime collaborating with us. Authenticity matters most.

I am not about to spill Secrets®, LifeHacks© or Cast-a-wide-Net Workisms™, instead I will share stories which I slowly absorbed as lessons for how to be a better person, professionally, and in turn, increase the radius of my influence. (Don’t worry, I’ll throw in some bullet points, acronyms and pithy phrases, too.)

Many, many years ago when I was still single — as was my chin — I directed a comedy revue at Catch A Rising Star in New York City. No one would confuse this with a crowning achievement, still at the time, it felt like a definite check in the Win column. On Opening Night, the cast and crew gathered along with a veritable B-list of stand-ups and network suits in the club’s bar, with just enough space to mingle without physical contact, yet thankfully, not enough room for anyone to start dancing. (One should never see comics dance. It’s not even funny.) I was approached by a guy whose claim to fame was being a producer on a “ground-breaking” MTV “reality” series who surely wasn’t going to boogie. Instead, as he confided because “we have mutual friends,” he would follow his normal, networking routine and urged me to do the same. His advice: “Pinpoint the most important, the most powerful person in the room, then stand or sit near them until they turn to you. When they do, hit him with your best idea. Boom!” I told him My Plan was to drink with my friends — those who had performed and those who had come to celebrate.

Honestly, I thought he was kidding. Hours later though, I saw him occupying the same barstool he’d pounced on next to the highest-ranking exec in attendance. Then, I saw the moment. The exec turned, he endured the producer's verbal barrage and turned right back around. The producer then ignored friends to stalk his next target. I ordered another cocktail. I am certain I had the better evening. Also, I networked more successfully. I still talk to many of the people I partied with that night and the producer is no longer in the business.

The only thing the producer was remotely right about is the need to connect with other working professionals, we just disagreed about how you do it. Here are three steps which I’ve adapted from how I interview celebrities. (Trust me, there is significant overlap.)

You don’t need to pull up a stool next to anyone and everyone with at least one more IMDb credit than you have. Not only is that inauthentic, it reeks of desperation… and there is no cologne that can cover that stank. You want to connect with those whose work you admire and peers who will keep you honest. Want to network better, be more discerning.

When I worked in New York theater as a writer and director, I went to see as many shows Off-Broadway, Off-Off-Broadway and in Jersey survivalist bunkers as I possibly could. Granted, these represent many hours of my life I will never get back, yet they also helped shine a pinlight on those I needed to meet. I would stand by the stage door or send letters (yes, I am that old) to the creatives whose accomplishments struck a chord. I never asked for anything, my mission was simply to express my gratitude for their efforts. Truthfully, I never sought anything in return.

So, how do you get one’s attention? What sets your comments apart from other fans? SPECIFICITY. Point out particular elements of a show, a story, a performance that resonated with you and explain why it does. Be laser-focused. Be forthcoming. Be vulnerable. You don’t have to be right — whatever the hell that means — you need only be truthful to your emotional experience of the work. Many of my long-term, professional kinships were borne of my penchant for pinpointing something distinct, that was as meaningful to the creator as it was to myself. Many times, I have shocked an author by quoting a buried sentence that might otherwise be overlooked only to have them exclaim something akin to “that’s why I wrote the book.” This is precisely what happened when I first spoke with David Benioff — best known now as the co-creator of HBO’s Game of Thrones. We spoke about his film and television work and then I quoted a sentence from his novel, City of Thieves. He asked, “Who said that?” I answered “You did. Page 184.” There was a long pause, then he added: “I like that. Glad I wrote it.” Later: “Thank you.”

In short, if you want to get their attention,  pay attention. Once you do…

There is a small, yet case-breakingly significant caveat to my first point about getting attention. I’ve seen some misinterpret this as a hunt for the golden needle in a haystack. This is not a singular, one-time task. If you really want to connect with another, (try to) know them and their work as well as you might know yourself and your own. The way to win someone’s trust is to prove that you are not pandering, you are not manipulative… you are committed. You are dedicated. You are more than fan or Stan. You familiarize yourself with the other’s work because you wish to learn from them, with them. Yes, find some of those overlooked moments, elements or choices that engage yet confound you. Ask about them. An earnest question is worth a hundred times more than a calculated plea or, worse, a pitch. I remember querying the filmmaker, James Foley, about a sneaking suspicion I had about a bold acting choice Dustin Hoffman made for CONFIDENCE, only to have Foley go slack-jawed then smile, smack his gum and tell me I was now only one of only three people to know this — the other two being Hoffman and himself. We’ve kept in touch since.

Of course, if you are going to maintain relationships and build upon them, it’s best if it’s obvious they’re mutually beneficial. I don’t mean this in a business sense. What matters is that both parties sense that nurturing this connection may make them a better artist, a better person. I never dole out unsolicited advice —  that would be presumptuous and presuppose a level of authority I would never claim. Instead, I approach conversations with fellow artists and academics much like a dramaturg interacts with a playwright — by asking questions that suggest possibilities. Inquisitive phrases that begin with “I wonder what would happen…” or “If you were to alter this choice…” have the capacity to spark new thought without obliging the listener to comply or feel awkward if they reject the notion. If your ideas have value, they will be noted, take root. It’s a lot like INCEPTION, only it takes less time, fewer f/x and far less exposition. The best-selling author, Steven Johnson, became a friend over the course of several conversations. During one of our early talks, I asked him an open-ended question both to amuse and provoke. About a month later, that question served as the launch of an Op-Ed he published in The New York Times. I had offered value.

I promised an acronym and a mnemonic. Here ya go: O.W.E.  Or, Offer Without Expectation. It’s sort of the spiritual antithesis of I.O.U. Never keep tabs. “I did this so I deserve that.” It’s very American, yet completely counter-productive. If everyone’s always keeping score, no one ever plays. The best partnerships are ones built upon the notion that it all comes out in the wash. Or, for those determined to tally: everybody wins. (Take that, zero-sum thinkers.)

For nearly a quarter century, I have been hosting brunches and dinners and cocktail parties for creatives of all stripes. Free food. Free drink. No agenda. I have done this by myself and in tandem with individuals and organizations such as Washington Filmworks, all across the country. Sometimes the events are swanky, oftentimes fairly low-key. The one constant is the integrity of the conversation at the table and the connections others make. I believe that when we break bread, we make good. Heck, we may make Art. There are no metrics for my conviction and heaven forbid one be tempted to measure impact rather than simply witness the results. From these meals I’ve watched movies hatch, careers launch, romances spark. Not bad for a day’s not-work.

If you take no other idea from this article, heed this one above. Please. Never expect anything in return. The moment you invest in the outcome of any conversation, any outreach, any query, etc, is the moment you become disingenuous. Why? Because once you have a stake in achieving a certain goal is the moment you start to twist yourself to  achieve those ends.

So, what if you not only want something, but feel you need something? Don’t. Fight the urge.

However, if you can’t resist, if you positively need something from a fellow professional with whom you are nurturing a relationship, follow this rule: C/OP OUT.

That is, create opportunities and an out for the individual. Rather than ask for something, share a story of where you are, what’s at stake and what obstacle you may have encountered. Stories allow the listener to sympathize and consider how they may or may not be able to help…or want to. By not insisting, you remove hints of the exploitative and, better yet, return sovereignty to the one you are addressing. Rather than feel pressured to say Yes or guilty should they say No, they can weigh their options and respond if and how they like. You are kindly respecting their autonomy and tacitly underscoring that they should not feel obliged to help. Consequently, should they choose to assist you, you can rest easy knowing they are doing so on their own accord and, most likely, that they do so because they respect you or consider you a peer. I swear this approach beats the awkwardness of any outright ask and the embarrassment of the sudden silence — whether in-person pause or e-ghosting.  The number of kindnesses that have been offered me are too numerous to count and too special to summarize in a single anecdote. Suffice it to say, I’ve built a network without ever trying to, one which rivals organizations nearly a half-century old.

A final thought: if ever you can serve as a professional conduit for others, do so. Be a mensch, make introductions. When you lift others up, you secure your own foundation. Generosity doesn’t take a village, it makes one.

This is some text inside of a div block.